TerraUSD was forced to use its Bitcoin and crypto reserves in order to mount a defence of the UST stablecoin, resulting in a market downturn and a liquidity-driven de-pegging event.

The algorithmic stablecoin UST lost its $1 peg for the second time in three days, dropping as low as $0.61 according to data from TradingView. As UST has “de-pegged,” the LUNA token dropped 63% to $23 in just over 24 hours.

The negative price-action prompted Terra to deploy its bitcoin reserves in an attempt to recover the peg. The ensuing price action prompted the Luna Foundation Guard (LFG) to snap up and quickly deploy 28,205 bitcoin in a bid to defend the peg by buying up UST and providing liquidity on exchanges. That attempt coincided with a modest recovery in UST’s price; it surged from lows in the $0.65 range to $0.91 at the time of publishing.

The foundation’s official Bitcoin reserves have been fully depleted at press time, per data from Glassnode. 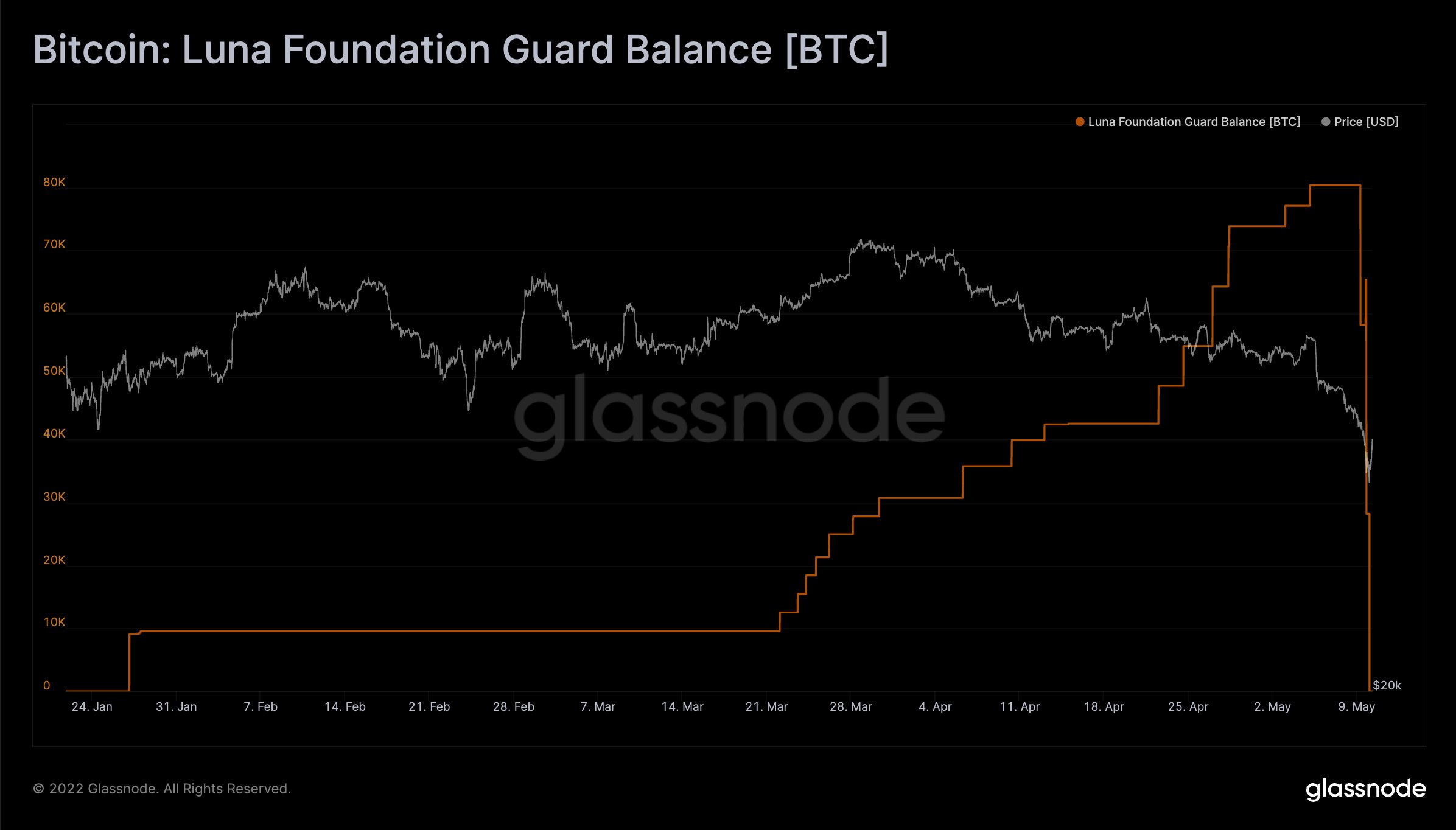 As of Monday, UST’s believers and detractors pondered the extent to which the Luna Foundation’s actions exacerbated the Bitcoin sell-off. Bitcoin fell to $29,900 during the event – a price not seen since July 2021 – but has since recovered a modest 5.6% to $31,800 at the time of writing.

While Terra supporters signalled confidence, long-time critics had their “I told you so” moment. Some compared Terra to IRON Finance, a stablecoin that went to zero last year in what was marked as crypto’s first large-scale bank run.

UST, an algorithmic stablecoin is supposed to maintain a steady price of $1 using a game theoretical model and a number of blockchain-based mint/burn mechanics. Under ideal circumstances, these systems ensure that traders can swap $1 UST for $1 worth of Luna, whose floating price is intended as a shock absorber for UST price-volatility. However, free markets have a tendency of stress testing systems and stablecoins are no exception.

Today, stablecoins like Tether and USDC are at the bedrock of decentralised finance (DeFi), with fully-collateralised answers to the digital dollar. Both have undergone stress tests in the past and continue to serve the ecosystem as intended, for now. Terra’s espoused mandate is to achieve the same results in a decentralised manner.

With a $16 billion market cap, no official bitcoin reserves and open intervention to defend the 1:1 peg, Terra’s claims are presently dislocated from reality.

Terra claims its algorithmic stablecoin will take power away from centralised institutions and failed monetary policies. Critics and Sceptics say the system is merely a ponzi scheme held up by memes, unsustainable fundamentals and several whales.

A total UST collapse could send ripples through the Terra DeFi ecosystem, while also providing gunpowder for regulators to step in after retail investors are left holding “the largest bag of odorous excrement ever assembled in the history of capitalism.”

On Monday LFG announced that it would loan out reserves to market makers in an attempt to maintain UST’s peg.

At the time of publishing, LFG’s official reserves total at $94.8 million. It remains to be seen whether MM’s will be able to maintain the UST peg if another bank run takes place. At press time, Luna’s market cap is below that of UST’s, which may jeopardise the stablecoin’s mechanism as 1 UST may not be redeemable for $1 LUNA.

Notably, Do Kwon has been uncharacteristically silent on Monday with his last tweet notifying users of fresh capital allocation.

In times of distress, a prolonged period of silence is rarely a good indication of things to come with respect to the Luna Foundation.

USD Tether dominance increased 8.4% since yesterday, per data from TradingView.

Bitcoin, Litecoin and other cryptocurrencies that are no longer directly linked to the sub-sector may not necessarily be at risk in the short term if UST ceases to exist.

UST/USD has lost its peg at the time of writing, exchanging hands as low as $0.27 on Wednesday. Luna/USD also tumbled 86% in 24 hours, wiping out 9.7 billion in market capitalisation.

Algorithmic stablecoins like UST are backed by a basket of assets, such as LUNA and until recently bitcoin, supposedly without depending on a centralised third party to hold those assets. This week, however, UST/USD lost its peg, breaking the algorithmic stablecoin mechanic.