A fresh Kraken Intelligence report has highlighted several on-chain tailwinds for litecoin that have historically been a harbinger of price discovery for the ‘digital silver’ cryptocurrency.

The report starts out by noting that Litecoin is the most successful Bitcoin fork which has a tendency of taking the spotlight when the market least expects it.

Notably, in both instances the price surges did not happen in a vacuum, but were instead foreshadowed by several on-chain indicators. Per the report, these indicators have fired again.

Specifically, the number of unique addresses active in the network shows a parabolic uptrend since December 2020. The authors point out that this network activity has spiked dramatically this year.

The number of active addresses has recently gone vertical, the sharpest increase in activity since April 2021, a sign of a sudden burst in network demand and activity… the 7-day moving average of the number of active addresses recently it an all-time high of 606,730 on October 10th, 2021, or what has historically been a prelude to Litecoin entering into “price discovery” mode. 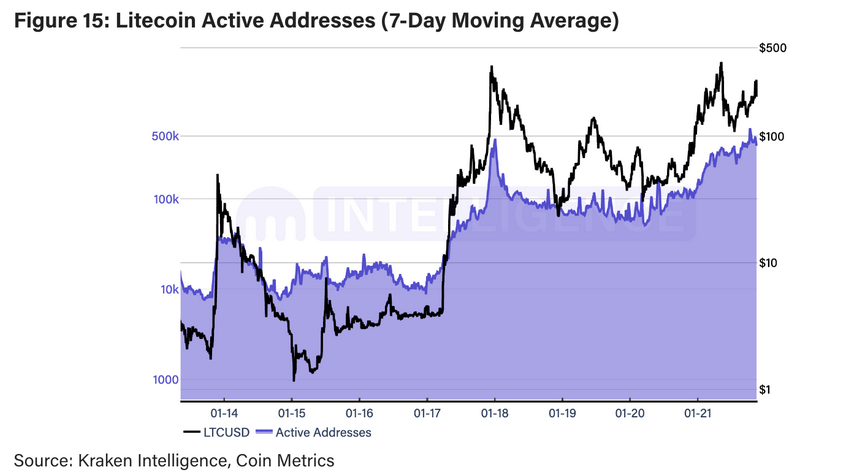 The authors outline the reasoning for general optimism, citing historical precedent as a robust bulwark for market action.

This sequence of events has happened on multiple occasions.

Notably, addresses with non-zero balances have also been on the rise, which historically eclipses the previous bull market’s all time high before price-action follows. In essence, on-chain data has surged into uncharted territory. This is positively correlated with market action.

Authors also cite Litecoin’s Reserve Risk and MVRV Z-score indicators – tools used to assess macro market bottoms and tops. Reserve Risk assesses long-term HODL confidence relative to the price of the native coin at a given point in time. On the other hand, the MVRV-Z score i sused to assess whether the coin is over/undervalued relative to its ‘fair value’.

Both indicators suggest Litecoin has yet to start its parabolic run.

New Data Shows Whales Accumulated Litecoin For Months on End
Veteran Investor Bill Miller Reveals half his Net Worth is Invested in Bitcoin and other cryptos
Ray Dalio says to minimize Cash and Bonds Exposure, and Increase inflation-hedge Assets like BTC