Investors are taking a keen look at cryptocurrencies and where to place their money. While Bitcoin is an obvious choice for some, a rising tide lifts all boats, and often enough investors tend to favour a diversified approach rather than centralised one.

Among the key factors crypto investor decision making are:

Seen with this backdrop, Litecoin could be a great investment opportunity right now. As the world’s 14th-largest crypto by market cap, Litecoin is positioned as a complimentary asset to bitcoin which most crypto portfolios already include due to its resilience and staying power. 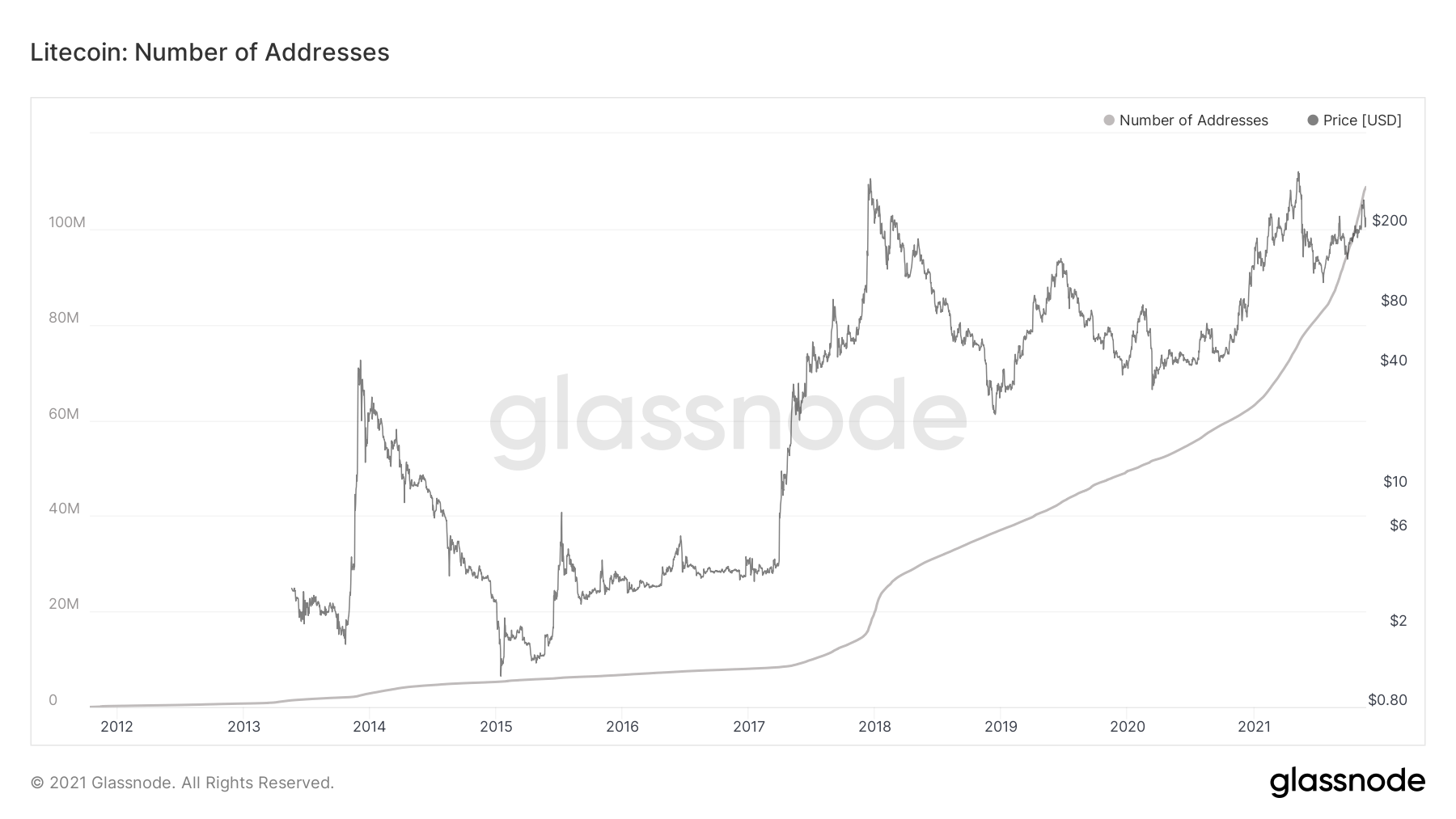 Over the years, the coin has become a household name for many investors due to its growing popularity and network effect.

So why should one own Litecoin?

1. Litecoin is technically faster than Bitcoin

One age-old reason that underpins the industry’s entire narrative is that crypto exists to facilitate transactions at comparatively low costs. In this regard, the faster the main chain of a given network can process transactions, the better it can scale to a broader user-base. This lowers costs associated with transactions and increases the utility for the end user. While the existence of stablecoins has altered this dynamic, the use-case for transferring value peer-to-peer without an intermediary will continue to carry the same significance as physical cash.

In Litecoin’s case, the network gets top marks.

Litecoin isn’t the fastest crypto among the mega-cap networks, but its relative speed along with a decade-long trust factor means it’s a great option for those looking to transfer significant sums of money totally unencumbered by legacy financial infrastructure. In fact, the network processes transactions about four times faster than Bitcoin. The block generation time is around 2.5 minutes compared to Bitcoin’s 10 minutes.  That’s a noteworthy difference, and one to keep in mind when the crypto narrative shifts towards payment processing times.

Besides this is the difference in encryption algorithms between the two networks, which is one of Litecoin’s most significant technical variances from the original code base. Indeed, given the relatively slow transactions in the largest crypto networks due to high memory pool load at peak hours, the value proposition for nimble and flexible protocols like Litecoin is well founded.

Low fees, convenience, robust liquidity and availability on the majority of exchanges are also big factors to consider.

The aforementioned factors are tailwinds that play into Litecoin’s ever-growing prominence as a robust cryptocurrency – a trend which has its roots grounded in a plethora of historical on-chain data and progress. Despite nearly halving in price since the May peak, Litecoin has increased 170% year-to-date. While it exhibits the characteristic volatility that Bitcoin does, it’s trajectory against fiat is clear: ‘up and to the right’. Throughout its decade-long existence, this macro trend hasn’t faltered. 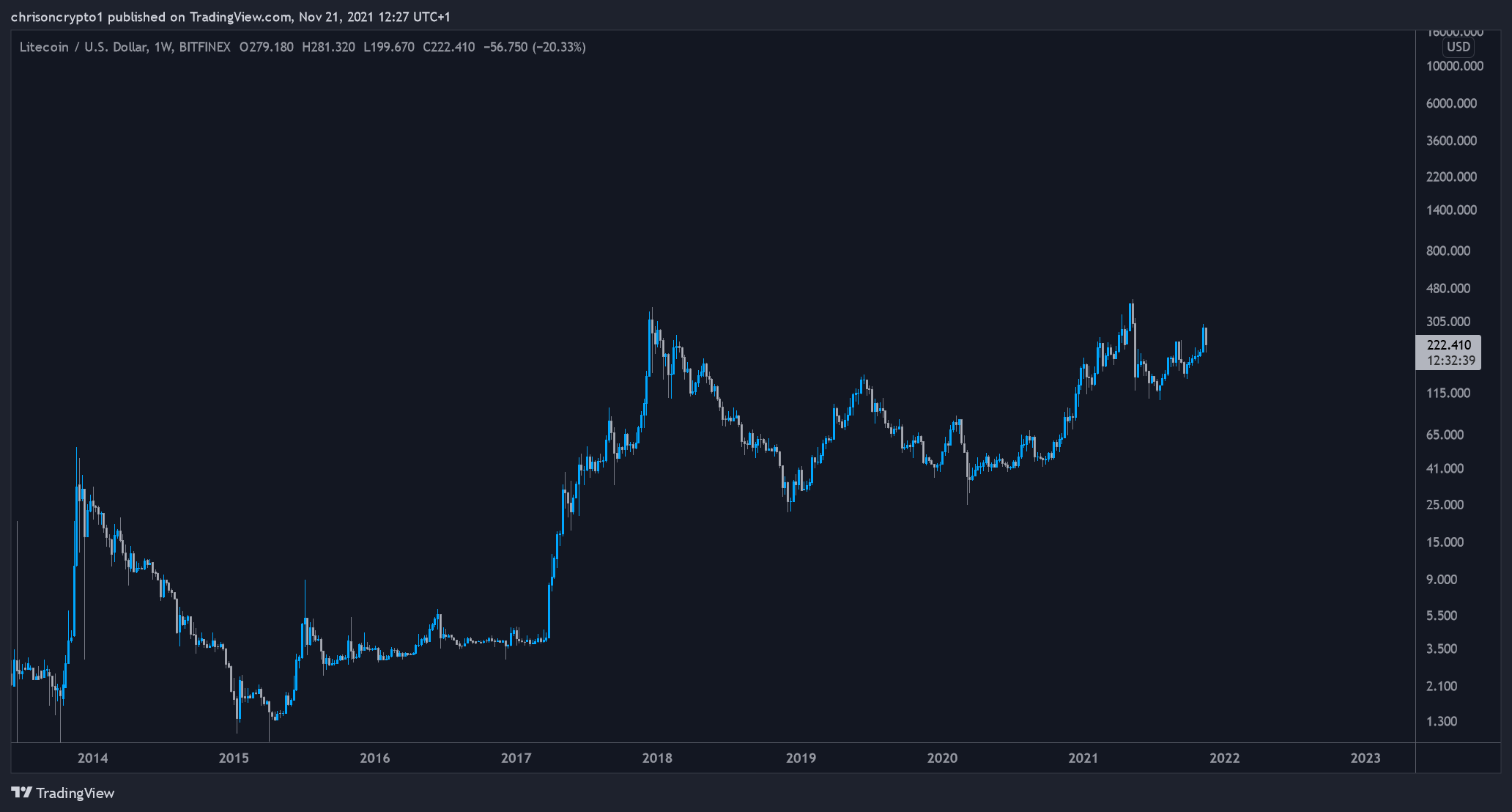 As of September 2021, it’s estimated that Litecoin has reached 50 million merchants worldwide – in-keeping with a massive spike in on-chain activity. That’s substantial. Indeed, this rapid adoption can be explained by both network effects as well as a history of good-faith development delivered without petty infighting (as was the case with the 2017 Bitcoin fork-wars).

Still, the fake news about the retail giant Walmart accepting Litecoin was one that some investors were prepared to take at face value. The fake news was revealed to be fake within minutes and prices tumbled. But this sequence of events was soon revealed to be relatively inconsequential on a longer-time horizon, with Litecoin regaining momentum as the aforementioned tailwinds bear fruit. Today, Litecoin exchanges hands around the same value it was when the fake-news story broke, underlining that user conviction hasn’t dwindled.

On the contrary, awareness of Litecoin’s existence and subsequent adoption have increased – the macro adoption curve remains unchanged.

Today, the race to innovate in crypto is unparalleled when compared to any other industry on the planet. Developers across crypto networks have scrambled to add value to their networks, with yield-bearing financial products, increased transaction speeds, lowering costs, privacy oriented updates, and a better user experience being some of the main development themes this year.

Litecoin is making a lot of headway on these fronts.

The Litecoin Foundation recently announced the launch of “OmniLite,” a decentralized token creation platform.  OmniLite is a layered protocol on top of Litecoin’s blockchain that benefits from Litecoin’s impressive security and low fees.

Via OmniLite, it’s possible to create stablecoins built on the Litecoin blockchain. With saturation issues plaguing leading cryptocurrency networks like Bitcoin and Ethereum, the room to grow for smaller networks cannot be overstated. Accordingly, it’s expected that via this launch, developers will have an incentive to utilize Litecoin’s blockchain, reaping the benefits of lower fees and faster processing times that facilitate a growing layered economy.

Putting it all together

Litecoin is a cryptocurrency that tends to build and innovate in silence. At the same time, it remains an intriguing option for investors willing to think outside of the box and recognise good-faith innovation and potential where it exists. Bitcoin and Ethereum are certainly likely to retain their status as core holdings, but decentralised blockchains that stand the test of time like Litecoin may soon make that list. And indeed, in some ways, Litecoin has already made it to large investment portfolios with Grayscale. being the largest asset manager in the industry accumulating the coin.

As with all things, however, there is no such thing as a risk-free investment. But in a world where runaway inflation is a real cause for concern, the tailwinds for scarce assets like Bitcoin and Litecoin (whose developers are constantly innovating) are compelling. The extent to which Litecoin can go beyond keeping up with the trendsetters and actually set the pace in this regard is an open question.

Having said taht, Litecoin’s value as an efficient network with low fees and high utilisation among merchants ought to entice industry enthusiasts to take a harder look at the project. Certainly, it’s an alternative that I’m paying close attention to right now.