The European Union is tightening the noose on the ICT sector following scant green energy policies which made the continent energy dependent. A would-be crackdown on proof-of-work mining would leave the continent more vulnerable to capital flight in favour of more accommodating jurisdictions.

The European Commission has introduced measures as part of larger plans to limit energy consumption of the information and communications technology (ICT) sector, including an environmental labelling scheme for data centres, an energy label for computers, as well as measures to define energy usage by telecoms services.

Energy commissioner Kadri Simson said the goal is to “make our energy system more efficient and ready for increasing share of renewable energy sources. For this, we need more innovative digital solutions and a grid that is much smarter and more interactive than it is today.“

The measures will purportedly support digital tech. in the energy sector via public sector-led programs. The crypto sector was not specifically mentioned, but the EU has taken a fairly abrasive stance against proof-of-work mining, despite the lacklustre evidence to support supposed environmental concerns.

The @EU_Commission proposal will aim to:

Despite the ill-founded attempts to ban cryptocurrency mining in March 2022, Europe has not yet taken the authoritarian China-route which has banned mining outright (out of fear of losing control over markets). The EU parliament’s Economics and Monetary Affairs Committee rejected the prospective ban of proof-of-work (PoW) crypto mining following lobbying efforts from pressure groups in the space.

The offending relevant paragraph in the Markets in Crypto Assets (MiCA) bill was removed before it was voted on.

Countries elsewhere chose to cull the mining sector all-together. Since the Chinese ban on PoW-mining in June 2021, the United States took the opposite stance of the regime, and in doing so secured a leadership position in Bitcoin mining technology and infrastructure.

The US holds a majority share of 37.4% of global hashrate, according to data from the University of Cambridge.

The MiCA bill is set to come into play at the end of 2023, and will oblige some market participants to make disclosures about their environmental and climate footprint. This is in-line with notorious Environmental, Social and Governance (ESG) policy-makers who are partly responsible for Europe’s self-inflicted energy crisis.

Last week, JPM CEO Jamie Dimon broke his silence on politically-motivated ESG investments, telling clients that “some investors don’t give a s–t” about “ESG,” the woke investing approach that US companies have increasingly embraced under political pressure. The CEO spoke in the context of conventional forms of energy, which are crucial to maintaining financial stability and independence; a thing which Europe has forfeited through short-sighted and ill-conceived green energy policies.

The world uses over 170,000 TWh of energy per year. This means that at its peak, the entire Bitcoin network is estimated to use less than 0.1% of the world’s energy consumption. That’s for a network with over 100 million users. 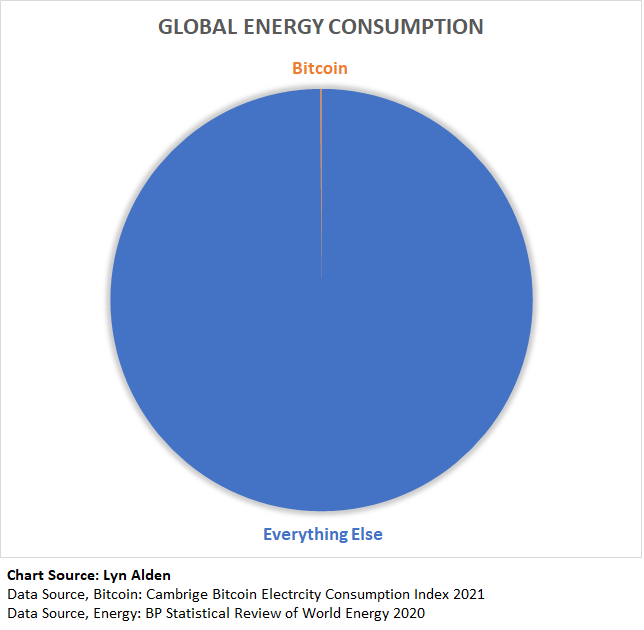 In other words, Bitcoin’s energy usage is a rounding error in regards to global energy usage.

It goes without saying that Europe’s tenuous stance on proof-of-work mining could leave the continent exposed to losing investment and innovation opportunities in both the energy and cryptocurrency sectors to other accommodating jurisdictions like the United States.