The newly appointed CEO of FTX Exchange, John J. Ray III, who was involved with restructuring Enron in 2001, addressed the many issues facing FTX Exchange and the lack of leadership exhibited by Sam Bankman-Fried and executives previously in charge of the company.

Never in my career have I seen such a complete failure of corporate controls and such a complete absence of trustworthy financial information as occurred here,” said Ray. “From compromised systems integrity and faulty regulatory oversight abroad, to the concentration of control in the hands of a very small group of inexperienced, unsophisticated and potentially compromised individuals, this situation is unprecedented.

Before delivering this astounding punchline, Ray explained that he has over 40 years of experience in restructuring companies. His words carry significant weight given his veteran status, experience and built-up credibility over the years. Ray has never witnessed a ‘failure’ of this magnitude.

The declaration spells out five core objectives that new leadership must get in order to move the situation in the right direction: implementation of controls, asset protection and recovery, transparency and investigation, efficiency and coordination, and maximization of value.

The new FTX CEO explained that he did not know anything about this auditing firm, and said that, ‘as a practical matter, I do not believe it appropriate for stakeholders or the Court to rely on the audited financial statements as a reliable indication of the financial circumstances of these Silos.’

Further, Ray underlined problems with disbursement controls, or lack thereof, noting the improper use of FTX funds (user funds) ‘to purchase homes and other personal items for employees and advisors.’

A clear-cut case of fraud?

Sam Bankman-Fried who until last week was the CEO of FTX is now facing prison time for allegedly defrauding his customers of billions of dollars. Besides having an open credit-line with sister-firm Alameda Research, the ex-crypto mogul donated customer funds to the US Democratic party, perfectly in line with his ‘effective altruism’ movement. Funds were also sent to so-called pandemic prevention and response research, which erroneously cast doubt on the benefits of Ivermectin and Hydroxychloroquine for patients with COVID-19.

Similar to Bernie Madoff, Bankman-Fried gave a veneer of humility, creating a positive image while running text-book ponzi schemes. At the same time, Sam likely tried to create a regulatory moat around the fraudulent business. In early November, just before FTX collapsed SBF debated Bitcoin OG’ Erik Voorhees on crypto regulation, and attempted to push DeFi regulation at the level of graphical user-interfaces – a potential death knell for the sub-sector and open-finance.

Speaking to VOX journalist Kelsey Piper this week, SBF also sent a deluge of compromising communications talking about his views on regulators and his justifications for behaving unethically, among other things. When asked about his investing of customer funds without consent, SBF simply said that it didn’t happen, even after admitting to funnelling customer money to his own hedge fund earlier this week. 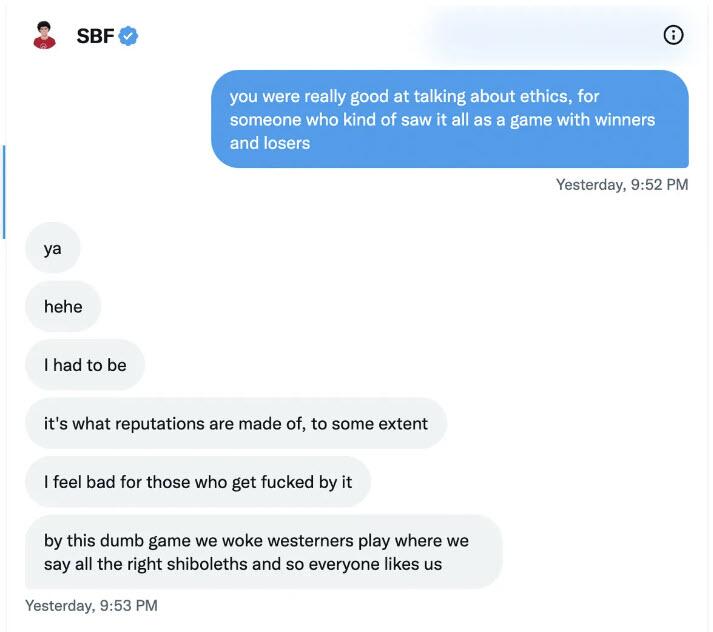 Most bizarre was SBF’s deepest regret – which was filing for chapter 11 bankruptcy (not defrauding customers). In the entire information dump, there appeared to be no base-level accountability, honest remorse or attempt at ethical conduct on the part of SBF. In revealing all these communications, Sam Bankman Fried openly admitted to intentionally deceiving millions of FTX customers, all the while shedding light on where those funds went through bankruptcy proceedings.

SBF is still scheduled to speak at a New York Times Event on November 30th. Ukrainian President Volodymyr Zelensky, BlackRock CEO Larry Fink, US Department of Treasury Janet Yellen, as well as Facebook’s Mark Zuckerberg will also be speaking at the event.

As more information comes to light there will be further revelations. But for now, the net result of FTX’s collapse is that billions of dollars were stolen from investors, leaving all those who put faith in Sam with a deep sense of betrayal. These funds were used by FTX-sister firm Alameda Research without user-consent, given to Democrat-aligned politicians, non-profits, journalists and other causes.

At this stage, there are simply too many red-flags to count.