New data from analytics platform Santiment reveals that Litecoin transaction volumes are on the rise, all the while the network’s hashrate reached a milestone not seen in three years.

Litecoin is often on the receiving end of criticism partly exacerbated by its muted price-action in 2021. However, the network continues to experience robust growth regardless, with recent whale transaction counts extending higher, as indicated by on-chain analysis platform Santiment.

🐳 #Litecoin may not be on many traders’ radars right now, but it quietly just saw the largest amount of daily $LTC whale transactions exceeding $100k+ (3,458 transactions) in 2022. Typically, this is an indicator of mid-term price direction shifts. 👀 https://t.co/mhi60PtUhX pic.twitter.com/uvCCTmW1Qy

Specifically, the number of transactions exceeding $100,000 hit the highest level since December 2021. 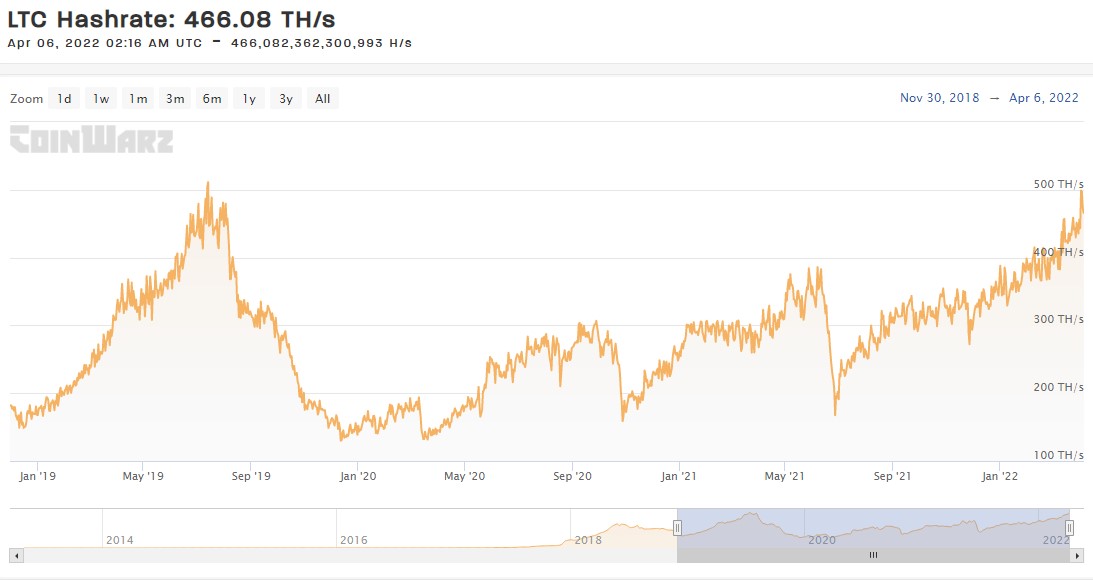 The “hashrate” refers to the total computational power used to mine and process transactions on the proof-of-work blockchain. It is an important metric which assesses network strength and security. Currently, Litecoin’s hashrate hit 466 TH/s, according to the latest data.

The most recent hash rate uptick comes in conjunction with the largest LTC transaction cluster spike in its 10-year history.

Litecoin exchanges hands at $121 at the time of publishing, up 19% on the month.

Bank of America When BTC traded at $60,000: it only Takes $93 million to Move the Bitcoin Price 1%
Legendary Investor Bill Miller Holds Bitcoin as Top Asset in 2023
Moody’s to Develop a Stablecoin Scoring System